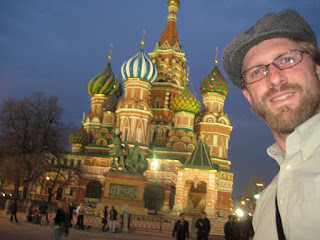 I've made it 9288 kilometres along the Trans-Siberian Railroad from Vladivostok to Moscow -- an exciting 9 days of train travel through 7 time zones in economy-class platzkart, with stops at Khabarovsk, Irkutsk, Kemerovo, Novosibirsk and Omsk.

It has been quite the journey, combining meetings with friendly Russian scholars on the history of the civil war with countless discussions with ordinary Russians aboard the trains and in the towns. Two nights ago, as the train approached the Ural Mountains -- which divide Europe and Asia and served as the major site of battle between the Red Army and White Russia in 1918-1919 -- I was drawn into a blurry night of vodka and conservation with a computer programmer from Etakerinburg.

Yesterday was more low key, as I napped and snacked on smoked fish, bread and tea with two young Russians and a elderly woman who had manufactured landmines in a Novosibirsk armaments plant during the Great Patriotic War (what we call World War Two).

Moscow is a bustling and attractive city -- with a population of over 10 million and a downtown centre rich in history. A man from the train named Alexander gave me a walking tour this morning, along the Moscow River and the pedestrian-friendly Arbat to the Kremlin, Red Square, and other sites. We took the city's famous metro to several ornate stations adorned with mosaic murals of Russia's revolutionary history and the country's working class. I will soon meet with a professor from the Institute of Far Eastern Studies, to glean information on Canada's invasion of Russia 90 year ago.

I am catching the overnight train to St Petersburg tonight, reaching tidewater after nearly 10,000 kilometres of rail travel and spending a few days in Russia's historic imperial capital -- where Bolshevism took root in 1917.

I will be in touch soon, 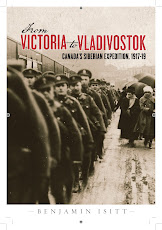 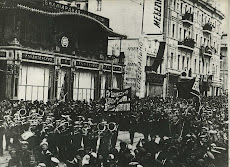